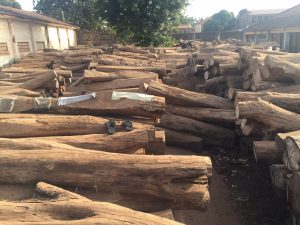 Rosewood is noted to be the most lucrative illegal operation in wild fauna and flora especially across the West African region. The high demand from China has led to illegal logging across the continent thereby increasing the exploitation and exportation of rosewood. The continent is losing huge sums of money due to unsustainable means of harvesting its natural resources as well as through illegal trading which in turn have devastating effects on the environment.

While these resources are dwindling with some going into extinction, the Africa Union (AU) has continuously expressed concern that if the trends of unsustainable exploitation of the resources are not put to a halt, the continent may face more severe implications in the near future. The AU is bringing governments and other relevant stakeholders together to see the need to preserve and conserve their resources; both plant and animals.

The West African region is the worst hit on illegal rosewood trade with Nigeria, Ghana and Gambia being the highest countries with 85 per cent exportation. Such illegal exploitation leaves in its trail massive environmental degradation. However, Nigeria and Guinea are currently banned from exporting rosewood by the Convention on International Trade in Endangered Species of Wild Fauna and Flora (CITES) due to the excessive illegal export of the wood from the countries.

The dialogue on illegal exploitation and trade in rosewood, which was organised by the AU in partnership with Forest Trend and the Guinea government, sought to put an end to the trend and the need to develop harmonized policies for the continent to tackle the unlawful business.