From this New Year, Azerbaijan is offering fifth and seventh freedom rights to some 40 countries in Europe, North America and Asia. The move is part of an attempt by Azerbaijan to become a transport and logistics hub between Asia and Europe – a strategy that has been successful for Kazakhstan. Under the new rules, all foreign airlines will have the same rights as the national air carrier, AZAL. One of the attractions for carriers will be the 100% discount on airport services for any new airline in its first year of operating in the country. The discount falls to 70% in the second year, 50% in the third and 30% in the fourth. 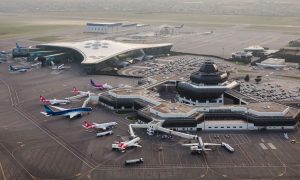 While the announcement praises the opening up of the country’s aviation sector, clearly some protectionism remains: Middle Eastern and Chinese carriers, among others, have not been afforded the new freedom. Only airlines from Georgia, U.S., Japan, Vietnam, Indonesia, Cambodia, Myanmar, Bangladesh, South Korea, Malaysia and Australia – along with European countries – can participate.