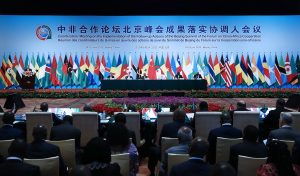 Chinese State Councilor and Foreign Minister Wang Yi is to pay official visits to Africa from Jan. 7 to 13 as his first overseas visit in 2020, which will mark the 30th consecutive year since 1991 that a Chinese foreign minister has visited Africa at the start of every year. Such a well-kept tradition already tells a lot about the flourishing and brotherly nature of China-Africa relations, and the year 2020 bears special significance for both sides since they embark on a new decade of strong ties well maintained by tradition and mutually beneficial cooperation over the years.

The very idea for such a tradition, as the late Qian put it, is because China believes that economies around the world were becoming more interdependent especially since the end of the Cold War, and Africa, as a big group of countries in the United Nations family, represents an important force in international affairs.China, as the world’s largest developing country, has to strengthen solidarity and cooperation with Africa and other so-called third world countries because this is the cornerstone of China’s foreign policy.

This year marks the 20th anniversary of the founding of the Forum on China-Africa Cooperation (FOCAC), a dialogue oriented towards promoting China-Africa cooperation and broadening consensus on issues of mutual concern. Since the FOCAC’s inception in 2000, China and Africa have witnessed unprecedented cooperative outcomes. China has been Africa’s largest trading partner for 10 consecutive years. In 2018, trade volume between China and Africa amounted to 204.2 billion U.S. dollars, up 20 percent year-on-year.