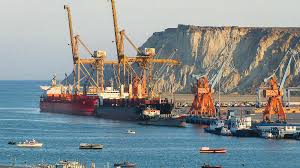 Pakistan’s newly opened southwestern Gwadar seaport has begun handling transit cargo headed to and from landlocked Afghanistan, marking a significant outcome of Islamabad’s multi-billion-dollar collaboration with China. Kabul traditionally has relied on Pakistani overland routes and the two main southern seaports of Karachi and Port Qasim for international trade under a bilateral deal with Islamabad, known as the Afghan Transit Trade Agreement (ATTA). The recent Chinese financial and construction efforts, though, have activated the strategically located Arabian Sea deep-water port of Gwadar, which offers a much shorter overland link, particularly to southern regions of Afghan, for the rapid delivery of goods.

The port is at the center of the China-Pakistan Economic Corridor (CPEC), which is building Pakistani roads, power plants, economic zones and a major airport in Gwadar to improve connectivity between the two allied nations and the region in general. Pakistan constitutes roughly 47 percent of total Afghan exports, while some 60 percent of Afghan transit trade goes through the northwestern Pakistan border crossing of Torkham. The Gwadar Port will increase the transit trade activity between the two countries. China also has initiated a trilateral dialogue to help ease tensions between Kabul and Islamabad to encourage political, security and economic cooperation in the region.