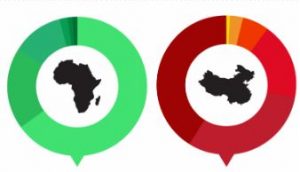 It is not a secret that China has recently been actively increasing its influence in the countries of the African continent. China’s interests in Africa become very clear if we take into account the fact that at the beginning of the 21st century, the Chinese economy faced a number of systemic problems associated, first of all, with the excess of growth rates over domestic consumption. Another problem is the acute shortage of resources for the country’s economic growth. To solve these problems, the leadership of the PRC put forward a new foreign economic strategy of active access of Chinese manufacturers to world markets, development of natural resources of other countries and active investment abroad. Africa became the continent that met all the goals of the Chinese strategy.

The reason for development is primarily the complementarity of the economies of China and the countries of the African continent. The main goal in trade with Africa for China are natural resources. This is evidenced by the fact that more than 50% of all imports are oil products, and more than 80% are another natural resources in general. In addition to oil (main suppliers: Angola, Sudan, Algeria), China also imports iron ore, gold, platinum from South Africa, copper and cobalt from Congo and Zambia. Regarding agricultural commodities, China primarily imports rice, palm oil, cotton for the textile enterprises.

China is quite successful in its trade policy, importing natural resources and exporting consumer goods. At the same time, despite the more than 20-fold increase in trade with Africa in recent years, the Sino-African trade turnover is only 5% of the total trade turnover of the PRC.