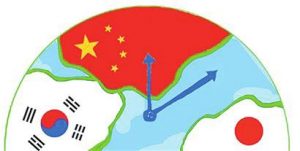 The trade ministers of China, Japan and South Korea pledged to step up their negotiations on a trilateral free trade agreement and a wider Asia-Pacific deal. Chinese Commerce Minister Zhong Shan, Ministry of Economy, Trade and Industry Hiroshi Kajiyama and South Korean Industry Minister Sung Yun-mo met in Beijing ahead of a trilateral summit involving the leaders of the three countries recently in Chengdu.

A key focus was on whether Kajiyama and Sung would have contact during their stay in Beijing, but the two did not. Tokyo and Seoul are seeking to mend relations that have fallen to their lowest point in years amid a dispute over wartime labor compensation and export controls.

The three-way trade ministerial meeting is held on a rotating basis by the three nations. The last one took place in Tokyo in October 2016. China, the chair of this year’s gathering, has recently been keen to bolster economic cooperation with neighbors including Japan and South Korea to offset its shrinking exports, which have damaged by the tit-for-tat trade dispute with the United States.