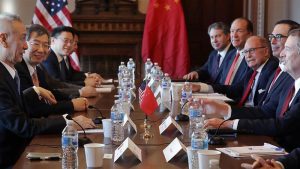 The trade ministers of China, Japan and South Korea agreed to work towards a regional trade pact and a trilateral free-trade deal. The agreement was reached despite the recent bitter quarrel between Tokyo and Seoul and the uncertainty caused by China’s ongoing trade negotiations with the United States, as well as the threat of North Korea resuming nuclear tests. The ministers did not announce any concrete results after the recent talks in Beijing, but they voiced their willingness to continue discussions on the RCEP – which also includes the Asean group of countries, Australia, India and New Zealand – as well as the three-way free-trade deal.

Chinese Commerce Minister Zhong Shan said China was willing to work with South Korea and Japan to “oppose unilateralism and protectionism” and to support a global multilateral trade system. He added that the three countries should “jointly maintain regional peace and stability and promote an open world economy”. While Zhong did not directly refer to China’s trade war with the U.S., it looms large in Beijing’s thinking, prompting a renewed eagerness to boost economic ties with its neighbours to mitigate the risk of “decoupling” from Washington.