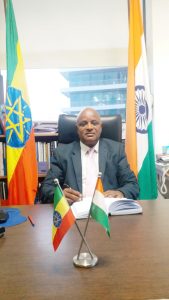 Ethiopia, one of the most stable countries in Africa experienced radical transformation and stability after the 2012 peaceful transition of power. As one of the fastest growing economies in the world, Ethiopia’s economy is on a positive growth trajectory and has made significant progress in achieving its development goals. Demeke Atnafu Ambulo, Consul General, Ethiopia gives an insight into the investment opportunities available in Ethiopia to Relin Hedly, New Media Communication.

Ethiopia has become a preferred destination for foreign direct investment and emerging hub for manufacturing. Demeke Atnafu Ambulo, Consul General, Ethiopia reveals, “Stable socio-economic governance with sustained peace and security makes Ethiopia a great investment destination. Apart from excellent incentive packages for priority sectors and export-oriented investments, Ethiopia opens up massive opportunities with bold initiatives for the development of state of the art industrial parks, electric-powered railway connecting the capital and other economic corridors to the port of Djbouti.”

Ranked 34th/138 economies for impartial public decision making, according to the Global Competitiveness Report 2016, the country has experienced an average of about 11% GDP growth since 2005, one of the fastest growing economies in the world during the same period (World Bank Global Economic Prospects, CIA World Factbook). Demeke credits the stable and conducive macro-economic environment for the exponential growth. He adds, “We implement a structural growth plan that aims to transform Ethiopia from an agriculture-led economy to an industrial one.

Accessibility plays a vital role in the infrastructure development of countries. Ethiopia’s strategic location with proximity to the Middle East, Europe, USA and Asia with duty-free-quota-free access to USA and EU markets through AGOA and EBA gives Ethiopia a significant edge as far as trade is concerned. Statistics reveal Ethiopia as the second most populous nation with current size of more than 110 million and 54 million active labor force available at competitive wages. Emphasizing on the convenience factor Demeke says, “Ethiopia provides preferential market access to China, India, Japan, Canada and Australia and is also a member of COMESA with preferential market access to a regional market of 400 million people.”

Ethiopia offers a comprehensive set of fiscal and on-fiscal incentives to encourage investment into priority areas that include customs duty exemption of up to 100% on imports of capital goods for eligible areas of investment. Income tax exemption for a period ranging between 1 and 9 years depending on the specific activity and the location of the investor is another distinct proposition investors can look forward to. “Duty drawback scheme, voucher scheme and bonded factory and manufacturing warehouse schemes, various non-fiscal incentives for exporters and guaranteed remittance of capital for foreign investors are unique characteristics to promote investments and trade in Ethiopia,” says Demeke.

Prioritizing trade in sectors such as textile and apparel, leather and leather products, agro-processing, sugar and related industries, chemical, pharmaceuticals, metal and engineering, Ethiopia facilitates relaxed industrial park regime-relaxed regime on the possession and administration of industrials park land and 60-80 years charge-free lease for developers, discounted lease rates for investors manufacturing in the parks. Other facilities offered by Ethiopia include the right to open and operate foreign currency accounts and employ expatriate managers and experts.