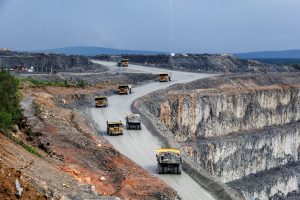 Mining activity in the European Union has gone from being a very visible driver of European economic growth to an activity that is more out of sight and out of mind. But with raw material access coming into question, mining in Europe may be coming back into the spotlight. Today, the EU imports most of the materials it uses rather than mining them itself. It is a net importer of raw materials, in which it has had a trade deficit since 2002. Last year that trade deficit stood at €31 billion.

While mining in the rest of the world has increased exponentially, it has remained limited in Europe, aside from coal and lignite mining which has declined. That has meant that the EU now accounts for a smaller share of global mining than it did a few decades ago. The European mining industry has long complained that it is not operating on a level playing field when it comes to international competition. There are also concerns that many of the important raw materials Europe imports come from parts of the world lacking political and economic stability – a situation that could be rectified by mining those same materials in Europe. Over 50% of major reserves are located in countries with a per capita gross national income of $10 per day or less.