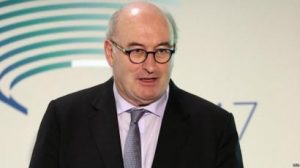 New European Union Trade Commissioner Phil Hogan arrives in Washington on what could be an impossible mission — resetting the world’s largest investment and trade relationship after three years of President Donald Trump’s trade-rattling tariffs. The challenge could be the 6-foot-5-inch Irishman’s most daunting to date, following tough but successful negotiations on an EU beef deal with the U.S. and a broader trade deal with Japan that took effect last year. The visit comes as Trump and U.S. Trade Representative Robert Lighthizer are feeling flush from a successful NAFTA renegotiation and a preliminary trade deal with China that will be signed soon. Trump sees both agreements as vindication of his get-tough approach to trade negotiations, which included threatening to withdraw from NAFTA and slapping duties on literally hundreds of billions of dollars of Chinese goods.