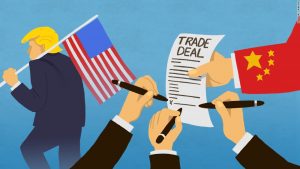 After walking out of negotiations on the 16-nation Regional Comprehensive Economic Partnership (RCEP) free trade agreement, the government said it would renegotiate its existing Free Trade Agreements (FTA) and redouble its efforts to conclude other trade negotiations. The task is likely to swamp both the Commerce and Industries Ministry (CIM) and the Ministry of External Affairs (MEA) negotiators in 2020.

To begin with, the RCEP walkout isn’t cast in stone yet, as the other 15 countries including 10 ASEAN members (Indonesia, Thailand, Singapore, the Philippines, Malaysia, Vietnam, Brunei, Cambodia, Myanmar and Laos) and their FTA partners, China, Japan, Australia, New Zealand and South Korea, will complete legal reviews by June and are only expected to sign the deal in November 2020.

In the interim, many countries, most notably, Japan, Australia and even China, have said they would be keen to work with India to convince the government to rejoin RCEP. The issue was due to come up when Japanese PM Shinzo and his Australian counterpart Scott Morrison — both of whom have had to cancel visits to India in the past month — reschedule their trips and meet Prime Minister Narendra Modi.

While the RCEP is being wrapped up, India’s long-pending negotiations with Australia for a Comprehensive Economic Cooperation Agreement (CECA), as well as Commerce Minister Piyush Goyal’s plans to reopen existing FTAs with ASEAN, Japan and South Korea will have to take a backseat. The next big trade focus for the government will be during the EU-India summit expected in March, when Mr. Modi is expected to travel to Brussels, to meet the new European Commission President Ursula Von Der Leyen, and discuss restarting EU-India Bilateral Trade and Investment Agreement (BTIA) talks. However, this is easier said than done, given that the talks that began in 2007 and stalled in 2013 over tariff issues, have not been resumed despite several efforts.

Finally, the CIM and MEA will focus on closing talks with U.S. Trade Representatives. In 2019, President Trump rescinded India’s GSP special status for exporters, which has led to more bitterness over the issue. Mr. Modi and Mr. Trump discussed the trade issues on two occasions when they met in 2019, but negotiators have been unable to forge any kind of deal, despite visits by Mr. Goyal to the U.S.

In the New Year, both sides hope that a package of smaller agreements can be announced soon, but a free trade agreement could be several years away, as it hasn’t even been discussed officially yet.