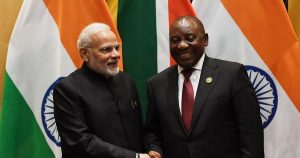 The bilateral ties between India and South Africa further deepened in 2019 with the two countries stepping up their cooperation in the area of defence and developing a road map to enhance their strategic partnership. South African President Cyril Ramaphosa was the chief guest at the Republic Day parade in New Delhi on January 26. The visit of Ramaphosa, the second South African President to be the chief guest at the Republic Day celebrations, was of high symbolic value and was very special for both the countries as India celebrated the 150th birth anniversary of Mahatma Gandhi, while South Africa observed the 100th birth anniversary of the anti-apartheid icon, Nelson Mandela.

In 1997, India and South Africa signed the Strategic Partnership, called the Red Fort Declaration. Since then, the bilateral ties between the two countries have grown stronger with the two nations having MoUs in practically all areas. During his 2019 India visit, President Ramaphosa renewed the Declaration with the three-year Strategic Programme of Cooperation (2019-2021), which aims at enhancing bilateral cooperation in a time-bound manner. The strategic programme will facilitate expansion of ties in several key areas such as defence, maritime security and trade and investment.