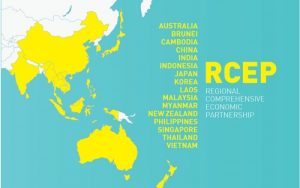 India has not closed the door on the Regional Comprehensive Economic Partnership (RCEP), Indian foreign minister S. Jaishankar said recently, adding that New Delhi’s concerns were clearly expressed and the ball was in the court of the partner countries. According to the minister, there was a substantial gap between India’s position and that of other countries in the RCEP — 10 Southeast Asian economies and their free trade partners, China, South Korea, Australia, New Zealand and Japan. India will evaluate the RCEP, widely seen as a China-supported alternative to the Comprehensive and Progressive Agreement for Trans-Pacific Partnership (CPTPP), which covers 11 countries across the Pacific on the basis of trade merits.

India announced it would stay out of the mega trade deal in November after participating in talks to conclude the deal for years. New Delhi’s concerns stem from the fact that there is strong opposition from domestic constituencies, including farmer bodies, dairy cooperatives, civil society organizations, and industry against RCEP as they fear it would lead to flooding of cheap Chinese goods and farm items from Australia and New Zealand in the Indian market. India’s current trade deficit with China is over $50 billion.