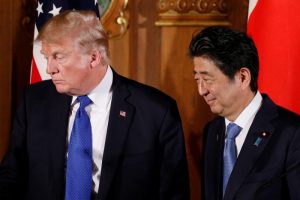 The goods trade deal, signed by the two governments less than a half year after they began talks in April 2019, calls on Japan to liberalize its agriculture market to the extent that it did under the 11-country Trans-Pacific Partnership pact. Under the bilateral deal, Japan immediately lowered its import duty on U.S. beef from 38.5 percent to 26.6 percent and will cut it down to 9 percent in fiscal 2033. Japanese tariffs on grated cheese, wine and high-end pork products from the United States will eventually be reduced to zero.

Meanwhile, U.S. tariffs on Japanese air conditioner parts and fuel cells were abolished as soon as the trade pact came into force. But the United States maintains import duties on cars and auto parts from Japan, despite strong calls for their abolition by the Japanese side. Tokyo aims to realize zero auto tariffs through second-round negotiations with Washington, which are set to cover services as well and are expected to be fully launched in April.