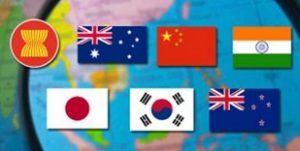 Despite India’s decision to exit of the ASEAN-led 15-nation Regional Comprehensive Economic Partnership (RCEP) Free Trade Agreement last month, officials from India’s Indo-Pacific partners Australia and Japan are still discussing the issue in the hope that the government will rethink the decision.

Japanese trade minister Hiroshi Kajiyama will discuss the terms with Piyush Goyal today under which India can get back into trade negotiations for RCEP. New Delhi decided to walk out of the RCEP being negotiated by the 10-member ASEAN, China, India, South Korea, Japan, New Zealand and Australia at the Leaders Summit as its main concerns, mostly related to opening up markets for its key competitor China, remained unaddressed. Kajiyama is expected to propose measures that will increase the competitiveness of Indian industries with the help of information technology, the official said. It could give subsidies to Japanese IT firms to carry out research if they entered into joint ventures with Indian companies. The country could also offer help in making the farming and fishing sectors more efficient.