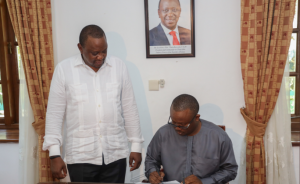 President Uhuru Kenyatta and Guinea Bissau President-Elect Umaro Cissoko Embalo recently said their respective countries will enhance their cooperation for the mutual benefit of citizens of the two nations. Speaking during a meeting at State House, Mombasa, the two leaders singled out exchange of students and teachers, collaboration in technical training, trade and security as some of the key areas of focus in bolstering cooperation between Kenya and Guinea Bissau. President Kenyatta congratulated the President-Elect for his recent win and urged him to bring the people of Guinea Bissau together, saying unity is critical for national development.

The West African leader recalled the strong historical ties between Kenya and Guinea Bissau that date back to pre-colonial times saying there was room for the two countries to consolidate and expand their areas of cooperation. At the meeting attended by Sports CS Amina Mohamed, the Guinea Bissau President-Elect invited President Kenyatta to attend his inauguration as the Chief Guest. The President accepted the invitation and wished Embalo and the people of Guinea Bissau success.