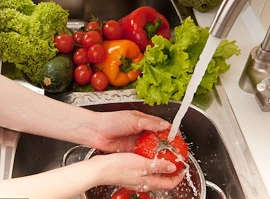 Food safety authorities and experts from 135 countries are meeting for the first time in a decade, calling for stronger action to protect people’s health and safeguard national and global economies from the effects of ever more complex foodborne disease outbreaks. The Second Global Meeting of the International Food Safety Authorities Network (INFOSAN) is being held 9-11 December, 2019 in Abu Dhabi. The event is being organized by the World Health Organization (WHO) and the Food and Agriculture Organization of the United Nations (FAO), and hosted by the Abu Dhabi Agriculture and Food Safety Authority (ADAFSA).

Unsafe food containing harmful bacteria, viruses, parasites or chemical substances, causes more than 200 diseases – ranging from diarrhoea to cancers. An estimated 600 million – almost 1 in 10 people in the world – fall ill after eating contaminated food and 420 000 die every year. Children under 5 years of age carry 40% of the foodborne disease burden, with 125 000 deaths every year.

“Increasing numbers of ever more complex food-borne disease outbreaks are claiming lives, causing sickness and threatening future health and economies,” said Dr Tedros Adhanom Ghebreyesus, WHO Director-General. “Countries must invest in technologies that trace food safety emergencies. They also must be transparent in sharing information on outbreaks to prevent their cross-border spread and the risk to health they pose.”

INFOSAN is a global network of 190 national food safety authorities, managed jointly by WHO and FAO. The network supports governments in managing food safety risks, ensuring rapid sharing of information during food safety emergencies to stop the spread of contaminated food from one country to another. Since INFOSAN’s first global meeting, a large increase in the number and scale of foodborne emergencies has been reported, driven by the globalization of trade in food and animal feed. Several recent major incidents demonstrate the global impact of such threats, including:

Listeriosis outbreak in Spain in 2019, the biggest in national history, caused more than 200 people to fall ill, three of whom died; World’s biggest ever listeriosis outbreak in South Africa in 2017-2018, leading to 1000+ people suffering food poisoning and more than 200 deaths;  A listeriosis outbreak in Europe linked to frozen vegetables produced in a Hungarian factory in 2018 affected seven countries, with 47 people falling sick. The factory manufactured food products that went to over 100 countries. Whole genome sequencing determines the complete DNA sequence of an organism’s genome at one time. This, in turn, increases the chances of identifying outbreak-related cases of foodborne illness from sporadic, unconnected cases. It also enables authorities to pinpoint contamination locations needing intervention.

Other major issues driving foodborne disease emergences that are being dealt with by the INFOSAN meeting in Abu Dhabi include:

Food fraud: the production and sale of food produced under fake or fraudulent labelling, including the ingredients they contain.

“FAO is committed to contributing to the global and unique INFOSAN network and in working together with all Member countries to scale up food safety in national and international political dialogues” said Mr Bukar Tijani, FAO’s Assistant Director General for the Agriculture and Consumer Protection Department.