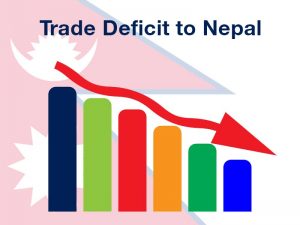 Nepal’s exports surged by 23.9 per cent in the first quadrimester of 2019-20 fiscal year, while imports fell by 6.9 per cent, as per the Nepal Rastra Bank (NRB). As per ‘Current Macroeconomic and Financial Situation of Nepal’ report of the first four months of the current fiscal unveiled by the central bank , Nepal exported merchandise goods worth Rs 36.28 billion compared to an increase of 11 per cent a year ago.

Similarly, merchandise imports decreased to Rs 450.3 billion against an increase of 35.8 per cent in the same period of the previous year. While the exports of palm oil, cardamom, yarn (polyester and other), jute goods, medicine (ayurvedic), among others, has increased in the review period, imports of MS billet, petroleum products, gold, aircraft spare parts, cement, among others, decreased in the review period.

Due to rise in exports and fall in imports, Nepal’s trade deficit narrowed by 8.9 per cent to Rs 414.02 billion in the four months of 2019-20. Such deficit had expanded by 37.8 per cent in the same period of the previous year.