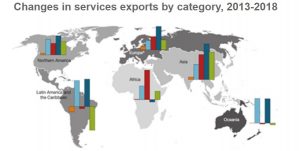 After a continued surge last year, global trade and economic output have stagnated this year, according to UNCTAD’s nowcast published in the 2019 Handbook of Statistics.

Last year, world merchandise trade increased by 2.3% in volume terms. The 9.7% increase in values could to a large extent be attributed to changes in prices. For example, fuel prices recorded substantial growth, year-on-year, during all the months of 2018, a trend that was reversed at the beginning of 2019, as UNCTAD’s free market commodity price index shows.

Maritime transport lost momentum in 2018. World seaborne trade volumes rose by only 2.7%, compared with 4.7% in 2017, and port container traffic grew by 4.7%, two percentage points less than the year before.