Russia Opens Gas Link To Turkey Amid US Opposition 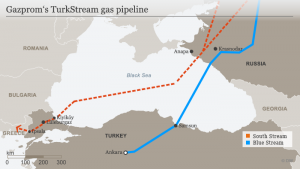 Russia is poised to officially open its TurkStream natural gas pipeline, further diversifying export routes to Europe amid a backlash from the US President Vladimir Putin and his Turkish counterpart Recep Tayyip Erdogan are meeting in Istanbul to inaugurate the pipeline in a ceremony celebrating the nations’ energy and political ties. TurkStream is set to carry Russian gas under the Black Sea to Turkey and supply several countries in southeast Europe once fully operational, just as US sanctions stall another Gazprom PJSC export line.

TurkStream consists of two pipelines running together underwater, each with an annual capacity of 15.75 billion cubic meters. Gas via the link has been flowing to Turkey and Bulgaria since January 1, according to utility Bulgargaz. A combination of existing and new pipelines will subsequently take supplies to Serbia and later on to Hungary. The project allows Russian producer Gazprom to achieve two strategic aims. First, it may help the company increase its market share in Turkey, currently among the top three buyers of its gas. Second, Gazprom can reduce its dependence on Ukraine as a transit route, a key objective following years of strained political relations between the two neighbours.

Construction of another major Russian pipeline project — the Nord Stream 2 link under the Baltic Sea — was halted last month because of American sanctions on the contractors building the line to Germany. The US, itself an emerging gas exporter to Europe, has claimed that Gazprom’s pipeline projects hurt the region’s security of supply. For Russia, the inauguration marks a further success in adding export routes, despite Nord Stream 2’s setback. Gazprom last month opened the giant Power of Siberia gas pipeline, which runs from Russia’s enormous reserves in eastern Siberia to northern China.