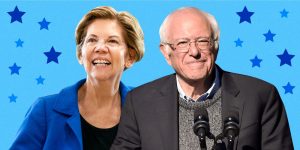 Sens. Bernie Sanders and Elizabeth Warren took opposite positions on President Trump’s North American trade deal, with Warren saying she would vote for it whereas Sanders said he would not. Sanders has consistently criticized the trade agreement, known as USMCA, because it does not address climate change on any level. Warren argues starting with this trade deal is a modest improvement worth exploring. Sanders has consistently criticized the deal because it does not have the phrase ‘climate change’ in it. And given the fact that climate change is the greatest threat facing this planet, the trade agreement fails to incorporate strong principles to significantly lower fossil fuel emissions in the world.