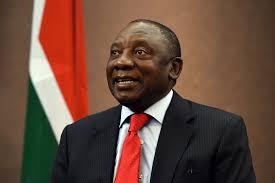 South Africa’s President Cyril Ramaphosa is set to take over the chairmanship of the African Union for the year 2020, replacing Egypt’s Abdel Fattah el-Sisi who chaired the organization through 2019. In his New Year’s address, the South African leader pledged to use the opportunity to rally Africa to actualize the Continental Free Trade Agreement, whose operational phase was launched in July in Niamey, Niger. Ahead of the assumption of the AU chairmanship, President Ramaphosa in November hosted the AU Commission chairperson Moussa Faki Mahamat for talks.

The two leaders held a high-level meeting to discuss the strategic priorities of South Africa ahead of the country’s assumption as chair of the AU in 2020. The decision to establish the AfCFTA was initially arrived at in the 18th Ordinary Session of the Assembly of Heads of State and Government of the African Union in January 2012, with a tentative launch date of 2017. The agreement is expected to create a market for over a billion people, with a GDP of approximately US$2.6 trillion. Various leaders have hailed the AfCFTA, terming it a game changer in Africa’s trade sector.