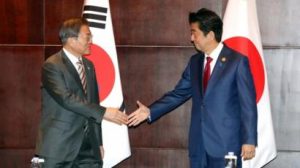 President Moon Jae-in and PM Shinzo Abe held talks as part of a group summit with Chinese Premier Li Keqiang in the Chinese city of Chengdu. Disputes over trade and World War Two compensation have damaged relations in recent months. This was the first formal meeting between the two for more than a year. Mr Moon and Mr Abe met for 45 minutes, longer than the planned 30.

The two leaders also discussed North Korea, amid concerns that the North is planning a “Christmas gift” – which analysts believe could be a missile test – if the US does not make concessions in nuclear talks. A satellite image has emerged in recent days of a new structure being built at a site where North Korea makes military equipment used to launch long-range missiles.