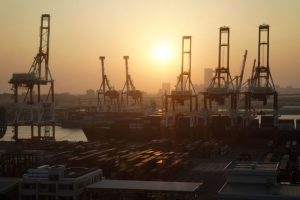 Japan’s economic growth is expected to slow modestly in 2020, as a consumption tax hike combined with a sluggish global economy are poised to drag on flagging consumer spending and exports. The government’s 26 trillion yen ($237 billion) stimulus package and Tokyo Olympics and Paralympics-linked spending by tourists will serve to underpin the world’s third-largest economy.

Japan’s real gross domestic product is projected to grow 0.49 percent in fiscal 2020 starting in April, according to the average estimate of 35 private-sector economists in the Japan Center for Economic Research’s ESP Forecast.

Growth will be at its second-worst level in six years, following on fiscal 2019’s 0.87 percent result which was the largest expansion in three years. Some economic data already signal the increase in consumption tax, from 8 percent to 10 percent on Oct. 1 last year, is cutting into private consumption.

Exports, a key growth engine of Japan’s economy, are expected to remain subdued after falling for the 12th consecutive month through November 2019, reflecting a slowdown in the global economy including a drop in shipments of auto parts and chip-making equipment to China, the largest buyer of Japanese products.

China is reeling from trade disputes with the United States and its economic outlook remains uncertain with the recent agreement on the terms of a ‘phase-one’ deal guaranteeing no immediate settlement of the trade spat. Trump’s persistent call for reduced trade deficits with Japan also provides little hope that exports to the U.S. will increase.