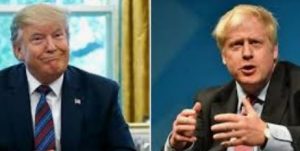 The Trump administration has set its sights on Europe, or more specifically, the European Union. Trade relationship between Europe and U.S was “very unbalanced” and warned that the U.S. was prepared to escalate tariffs against EU members.

The U.S. slapped a ‘light’ tariff on $7.5 billion worth of EU products in October, as allowed in a WTO ruling. The Trump administration has raised the rhetoric, and if things get nasty, the U.S. could slap tariffs on imports of European automobiles and automobile parts, which could have a severe impact on the European auto industry. This could have negative repercussions for the euro and European stock markets, such as the German DAX.

The U.S. is expected to start trade talks with the U.K. shortly after it leaves the EU at the end of January. With Boris Johnson enjoying a good relationship with Trump, and neither leader having much love for the EU, the U.S. could well give the U.K. preferential treatment over the EU.