Trump Trade Advisor Navarro: ‘Phase One’ Trade Deal Is ‘in the bank’ 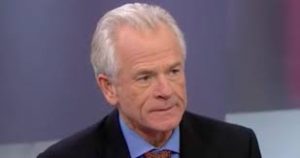 White House advisor Peter Navarro said the “phase one” trade deal between the U.S. and China is “in the bank.” Navarro, a longtime China trade hawk, refrained from commenting on rumors that the deal could be signed by U.S. and Chinese officials as early as next week, saying he would rather defer to U.S. Trade Representative Robert Lighthizer on specific timing.

But he did laud the phase one deal for including provisions proposed earlier in negotiations before a breakdown in talks earlier this year. Navarro also alluded to potential trade priorities for the Trump administration in 2020, including a new deal with a post-Brexit United Kingdom and other countries in Europe.

As one of President Donald Trump’s top trade counselors, Navarro has encouraged the president’s hard-line strategies on global trade and efforts to challenge the longstanding multilateral agreements that had come to dominate overseas commerce for the last three decades. For his part, Trump has attacked U.S. trade deficits as harmful to American manufacturers and farmers, saying that “by the time I finish trade talks, that will change.” The administration has leaned on the imposition of tariffs — a tax on foreign imports to the U.S. — to protect American producers and forced the renegotiation of landmark trade agreements with Mexico, Canada, China and the European Union.