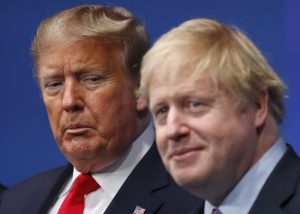 Trump and U.K. Prime Minister Boris Johnson are eager to strike a bilateral free trade agreement after Britain leaves the EU on Jan. 31, but getting there ‘will be a lot more complex’ than either side thinks, former U.S. trade negotiator Wendy Cutler said. “It’s going to take the EU and the U.K. a year to figure out what their relationship is going to be and that’s going to affect what the U.S. gains from a bilateral,” Cutler said.

The two sides could make progress this year toward completing a deal, but it will be hard to finish the negotiation until London decides whether it wants to align itself more closely with U.S. or EU regulatory standards in areas ranging from agriculture to the environment, she said. That will be a hard decision for the U.K., since the EU will still be its largest trading partner after it leaves the EU, and London will be reluctant to jeopardize long-time relationships on the continent by tilting too far toward U.S. demands. The U.K. will be making those decisions in real time, since it will be negotiating its future trade relationship with the EU at the same time it is talking with the United States, Cutler said.