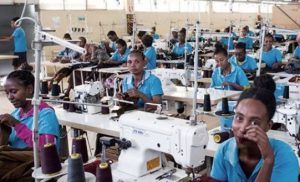 U.S. retailers and clothing brands are asking Congress to demolish the bipartisan foundation of our groundbreaking economic partnership with Africa, the African Growth and Opportunity Act (AGOA), a uniquely bipartisan effort to help unlock the continent’s vast potential. The lobbying is also an effort to undermine the opportunities provided to Haiti, this hemisphere’s poorest country, under the Haiti HOPE/Help legislation.

If they are successful, they will jeopardize the livelihoods of countless thousands of Africans and Haitians, mostly women, who have been lifted out of extreme poverty thanks to the jobs AGOA and other preference programs have helped create. They will discourage investment that would have created more similar jobs. They will gratuitously hand a huge win to global rivals who seek to portray us as partners who cannot be trusted.

Their lobbyists will deny it, of course, but that is nonetheless the likely impact of changes they seek in U.S. market access rules for developing countries when they come up for renewal next year. A proposed “modernization” of the U.S. Generalized System of Preferences (GSP) program would swing a wrecking ball at AGOA and Haiti HOPE/HELP and severely undermine some of the most significant opportunities created by Free Trade Agreements (FTAs) such as CAFTA, NAFTA and the Peru/U.S. FTA.

GSP waives U.S. import duties on products from the 119 developing economies that currently qualify for the program and allows up to 65% of the value of those products to come from third countries, such as China. While the list of products eligible for tariff exemption is already long, textiles and apparel are specifically excluded unless the exporting country also qualifies for benefits under AGOA, HOPE/HELP or similar initiatives that help to provide opportunities in Central America and the Caribbean.

AGOA is GSP with textiles and apparel included. U.S. brands and retailers are lobbying to make the same enhancement available to any GSP country that wants it, including countries that are already globally competitive in the production of textiles and apparel. Unfortunately, AGOA for all means AGOA for none. It would undermine the advantage of AGOA’s textile and apparel provisions, effectively gutting the act by eliminating the margins of trade preferences accorded to African countries.