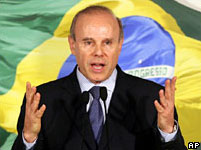 Such measures are the latest actions taken by the Brazilian government aimed at increasing liquidity in the market and the working capital of companies.

It is reported that 10 billion reais (4.67 billion dollars) were obtained from the Brazilian Development Bank (BNDES), while the remaining (2.33 billion dollars) funds will come from the state-owned bank Banco do Brasil.

Mantega said that the actions do not mean the government is bailing out any company as all financial operations are being conducted in normal market conditions.

He also said another package of 4 billion reais (1.86 billion dollars) will be aimed at preventing a sharp fall in car sales.
Ford, General Motors, Fiat and Volkswagen have already announced collective vacations for some of their employees in Brazil.
Mantega stressed that in the face of the crisis, it will be necessary to reduce the costs of companies and resume the expansion of credit.

The finance minister reaffirmed that Brazil is ready to face the global financial crisis because it has a dynamic economy, a high growth rate and enough reserves in Brazilian Reais and U.S. dollars.